One of the most symbolic stages on the Via Francigena! The way to the pass leads along a road which has served the whole of Europe for over 2000 years. Countless archaeological sites line the ascent, at the St Grand Bernard Pass there are also the remains of a Roman temple.

Left Bourge-st-Pierre about 9am after a good breakfast. started off very fresh temperature this morning, 0 degrees overnight. We're still following the number 70 path, there are also little Via Francigena stickers on many of the signs. 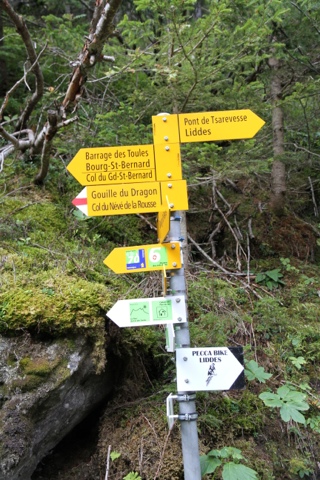 The walk today was so amazing, the scenery magnificent, we were blessed with beautiful sunny weather again, the meadows, cows, streams, waterfalls, ruins, Roman remains...! 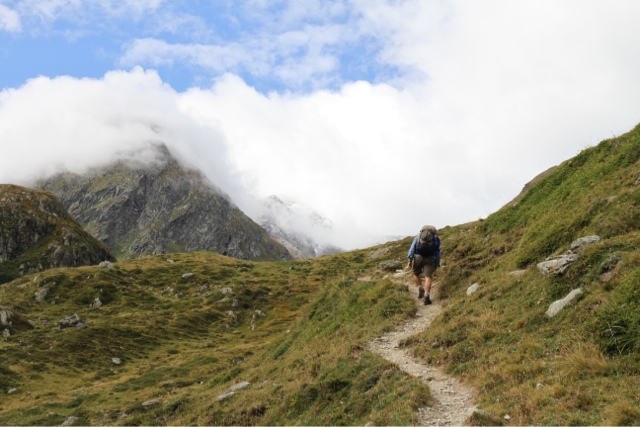 The way was mostly steep, but not overly strenuous. A highlight was walking past this stunning, fairy tale cottage nestled near the dam - our trail went right be it, we would never have seen this unless we were walking. 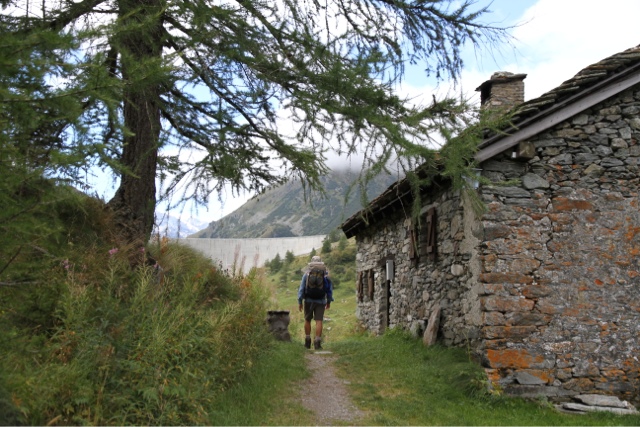 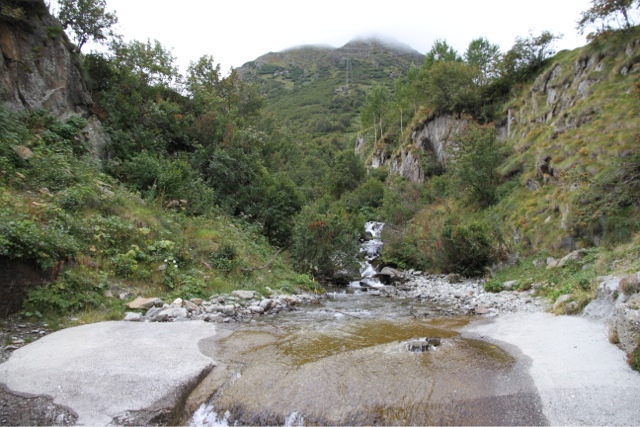 More old Swiss farm buildings, this one had a date og 1701 on a stone lintel. 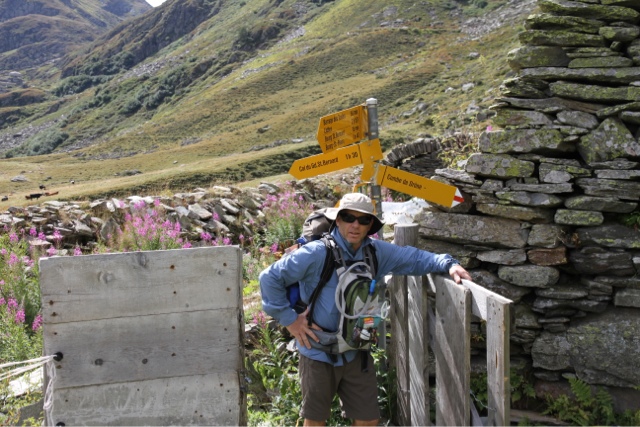 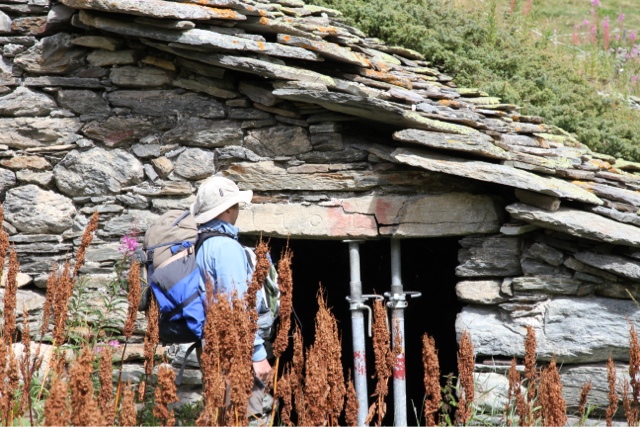 the meadows were full of vivid colored alpine flowers 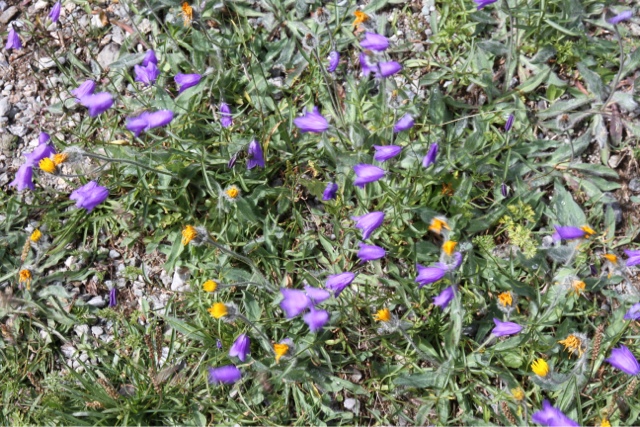 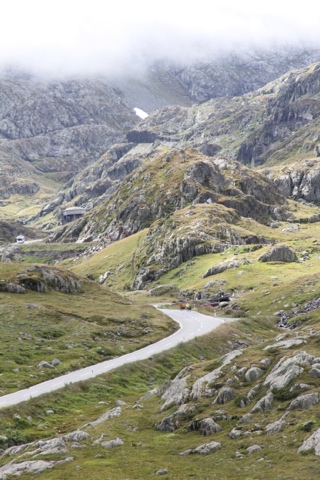 We saw Tom and Yvonne with their bikes along the road several times. 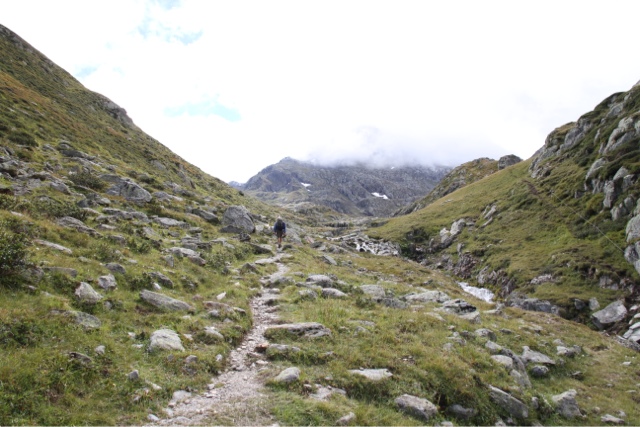 getting closer to the pass, the track became steeper and rockier, we also walk along the remains of Roman roads and steps - imagine building them thousands of years ago! no gortex jackets to keep the cold out... 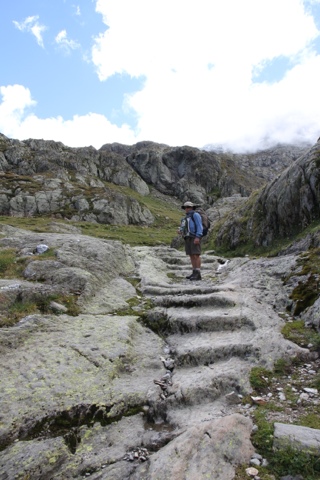 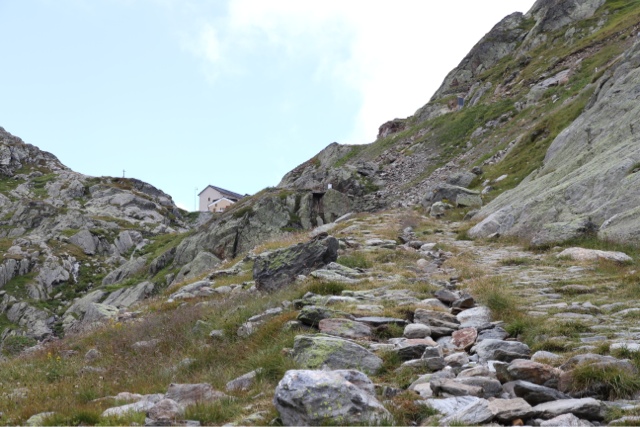 nearly at the top!

Arriving at The Pass, we can see the beautiful little lake that forms the border between Switzerland and Italy. The Great Saint Bernard Pass elevation for the crossing is 2473m !

Light snow flakes were whirling around in the sunshine for the last 500m of our climb to the Hospice, we arrived at 2:30 pm. The monk on duty gave us a lovely steaming bowl of tea on arrival!
61 Swiss francs each for room, dinner and breakfast. 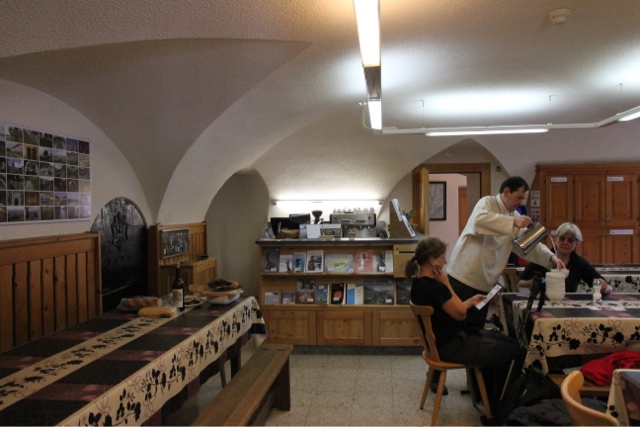 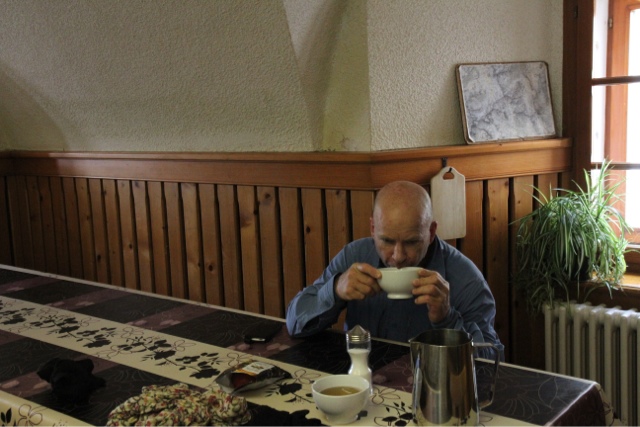 I booked the accommodation :) oops, booked for the 13th instead of the 12th - caused a little confusion when we arrived for Frederick the Monk who greeted us, but all OK. I was also confused, thinking the cost was 61 francs for both of us from the email response to my booking inquiry, but it's actually each... apparently lots of Swiss accommodation is priced per person...

dinner at 7:15 pm, breakfast at 8 am
St Bernard Museum - 10 francs each, but worth it, we arrived as some st Bernard's were coming back from their walk, so we had a pat, gorgeous, huge dogs! very friendly and calm. Wished I could take them for a walk too and spend more time with them - made me miss our lovely Labradors Milli and Pugsley... 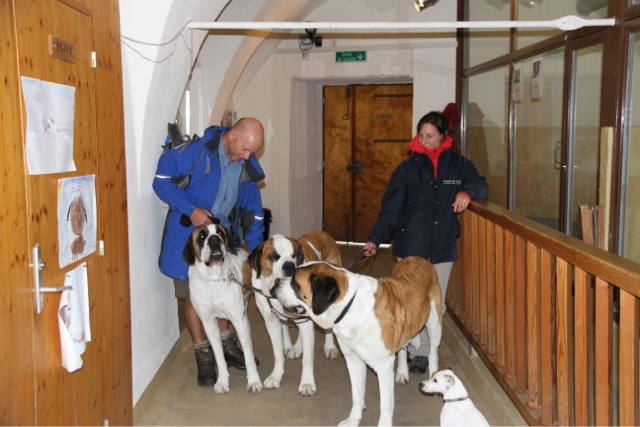 The museum also has fascinating displays of the Roman ruins, the development of the hospice over the years, (I definitely wouldn't want to be walking the VF years  ago when you also had to contend with bandits, robbers, and limited facilities!) and stories of  the rescues the dogs have performed ...  well worth an hour or so of browsing.
Lucky we arrived at The Pass before 4 pm, when a whiteout fog cloud came across, reducing visibility to 20 m at the most, and the temperature dropped significantly, icy outside. I would hate to be trying to follow the markers along the trail in this cold and visibility! We've settled into our room, had a hot shower and my down jacket is snug and warm, even walking outside. (good investment, wasn't sure if it would be cold enough to wear it...) 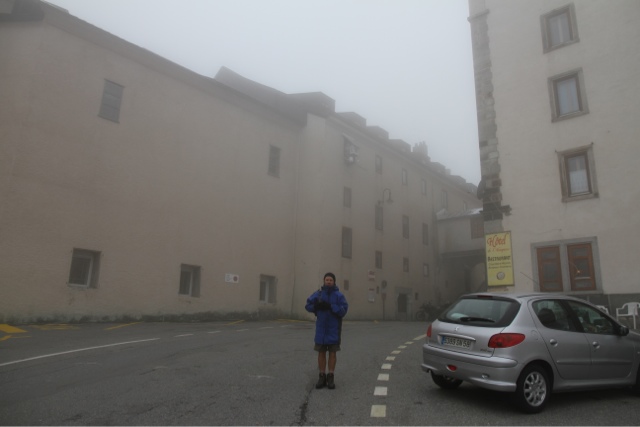 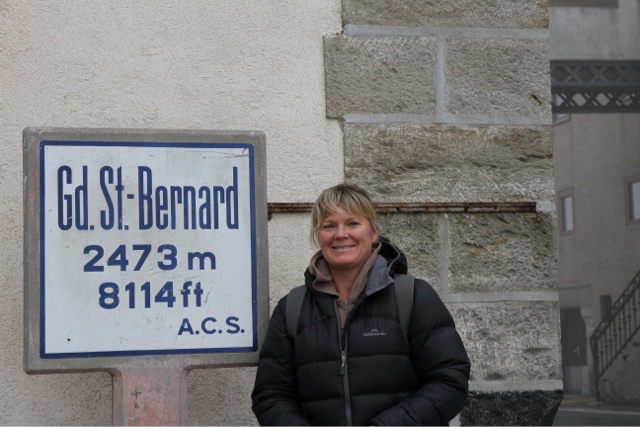 Dinner tonight was nothing to write home about, in fact I think the worst pilgrim meal I've ever had - soup (like a packet soup) rice and a preformed slab of undercooked meat... BYO dinner is my recommendation! It was good to sit around the table and chat with other walkers and pilgrims though 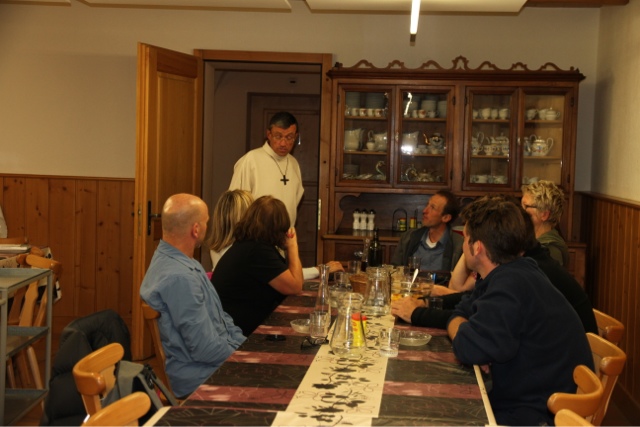 The building and atmosphere here at the St Bernard Hospice is wonderful, massive stone floors, thick walls about a meter deep, the chapel is beautiful, the significance of the Hospice as a refuge and rescue base is tangible. 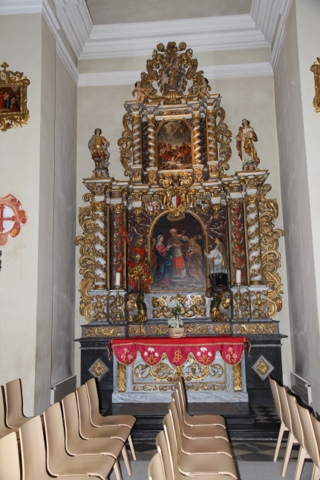 It's reserved for 2 people in the room with half board from 13th till 14th September 2013 in the "Hospice du Gd-St-Bernard"!